Explore the richness of Mother Nature at Corbett National Park with jungle safari tours and discover what makes this little gem a paradise for photographers, adventure seekers and wildlife lovers. A safari tour is the best way to come face-to-face with some fiery faces (tiger, jackal, wild boar and Himalayan bear) of the park.
There are three types of safaris available in Jim Corbett National Park; Jeep Safari, Elephant Safari and Canter Safari. Among these, jeep and elephant safaris are the most common ones and are available for every zone of the park. But Canter safaris run only in Dhikala Zone, the core area of the national park. Also note that only those people can do jeep safari at Dhikala zone having permits to stay at the forest lodges situated at Dhikala zone. If staying outside Dhikala zone then canter safari is the only option to do safari at Dhikala zone.
Because of the varied topography and enormity of wilderness, safari timing in Corbett are mainly limited to sunshine period of the day only. The park normally opens at 6’o’ clock in morning and remains open till 11’o’ clock in morning while in the afternoon the park’s opening timing is 1430 to 1730. However the timings can be changed as per the season. So it is good to get the entire information from the forest officials. 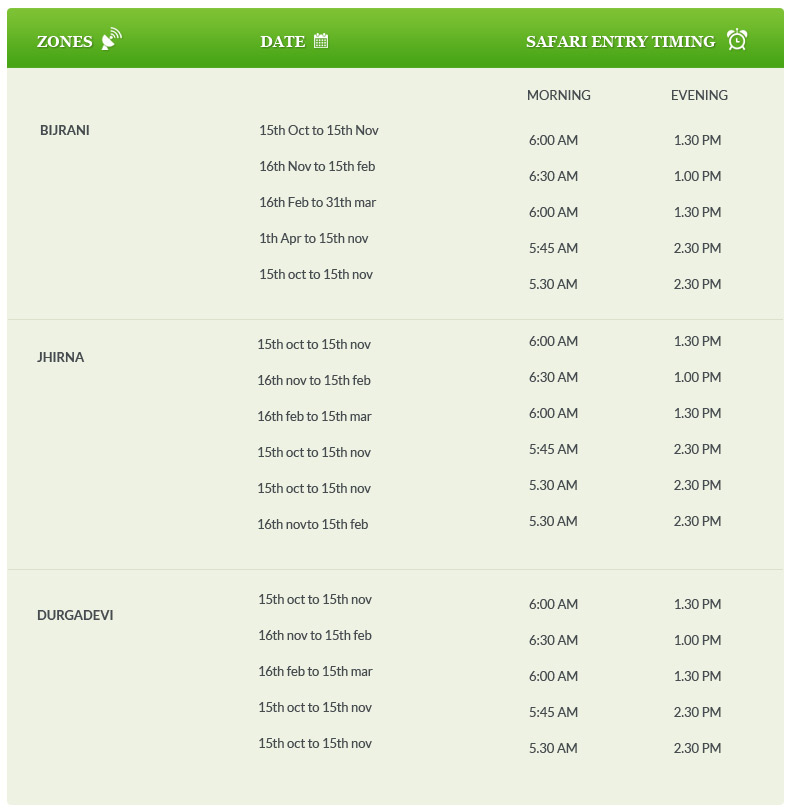 A ride on the back of an elephant is the most exclusive activity to enjoy at Corbett. Elephant safaris are not just the traditional way of enjoying the wild expeditions at the park without disturbing the routines of animals but are also preferred by those who want to have wider views of the surroundings.

All the procedures of safari booking at Corbett are done by the forest officials at the park as per the guidelines of India’s Forest Department. And pressurizing any official for any kind of liberation in safari booking and in scheduling safari timing is against the law and is a punishable offence. However there is restriction on the number of entering vehicles as per the season and zone.

Tourists can also enjoy advance booking of a jeep safari to avoid last-minute hassle at Corbett National Park. The booking is on first-cum-first service and can be done for both morning and evening safaris for Jhirna, Bijrani and Durgadevi zones. The advance amount is non-refundable and must be deposited along with photo id proof (driving license/voter id/pan card) and complete details of the person (gender, full name, birth date etc).
* Passport detail of foreign nationals is mandatory.

Dhikala Zone: It is the main tourist and core area of the park. Situated on the edges of the valley Patli Dun, Dhikala Zone is dotted with picturesque natural vistas and is considered a good site to spot herds of elephants, chitals and deer as well as Bengal Tiger. It opens from 15th November till 15th June only.
Jhirna Zone: Lying at a distance of 16km from Ramnagar, Jhirna Zone is the most comfortable safari zone that opens throughout the year. The zone is mainly noted for its bamboo vegetation and wonderful bird watching experiences. Jhirna zone lies in the southern area of Corbett.
Bijrani Zone: Another notable zone blessed with enormous yet mixed topographical features. The entry gate to Bijrani zone is Amadanda. The chances of tiger spotting are more here in comparison to other zones. Bijrani zone remains open only during 01st October to 30th June.
Durga Devi Zone: Situated about 28 km away from Ramnagar, it is better to call Durga Devi Zone a tough challenge for visitor. Its hilly topography and deep dark woody vegetation is quite favourable for witnessing several distinct species of birds. The zone is operational in between 15th November till 15th June every year.