Jim Corbett National Park is a diadem of Uttarakhand in terms of wildlife tourism. It is the first national park in the Asian continent and is known for its exotic flora and fauna.

It is the center for three countrywide conservation plans marked at saving prominent rare species from disappearance and providing a harmless environment for them.

Known for its arresting flora and fauna, Corbett attracts a horde of wildlife freaks from all over the world. However, the poaching of animals has been an issue in Corbett, because of which a large number of animals were killed here. These killings are done predominantly for their skin and the many y body parts which sell for large sums in the black market. To maintain the ecological balance and exquisiteness of the park, it is extremely important to conserve these wildlife species in the park.

In the words of Jane Goodall, “If we kill off the wild, then we are killing a part of our souls.” The conservation efforts that are taken up in Corbett clearly follow this thought. There are many conservation projects running in Corbett in order to protect its bewildering flora and fauna. The Corbett Foundation is a significant organization working for the conservation of animals in Corbett.

What are the objectives of wildlife conservation projects in Corbett?

There is a wide assortment of wildlife species in Corbett. Some of the major animal species found in Corbett are tigers, elephants, crocodile, Deer, Para or Hog Deer, Sambar, Kakar or Barking Deer, Leopards, Langurs, Wild boars, Gharials, etc. The park conserves all of these species in its bewildering woods.

1. What is Project Tiger?

Project Tiger is a special conservation project to conserve the rare species of big royal cats. In India, this plan was first practiced in Jim Corbett National Park.

The History of Project Tiger

Jim Corbett launched the project tiger in the year 1972, when the population of tigers declined to an all time low of 1800. This dwindling tiger count attracted the attention of the Government which then took quick steps to safeguard these tigers from being extinct. Just after the Wildlife Protection act was enacted in 1972, a new scheme to protect the tiger was mooted. This scheme was named as Project Tiger.

This project first came into practice in Corbett National Park on 1st April 1973 in Dhikala Zone. At that time, there were nine tiger reserves with the total tiger population pegged at 268.

Consequently, more protected regions were taken under the canopy of Project Tiger and the tiger count in India noticeably enhanced. It was projected at over 4,000 tigers as per the 1989 census.

Although, the 1993 census revealed that there was decline in the population of tigers with the total number of 3,750. The major reason for this decline was the increase in poaching of the tigers. The bones were used in the Korean and Chinese Medicine.

In recent times, more regions were taken under the Project Tiger and were declared as tiger reserves. Presently there are 43 tiger reserves in India. More areas are supposed to be merged in the list of these reserved areas for tigers.

Reasons behind the launch of Project Tiger

In the largest peninsula, the tiger count went through a heavy drop after independence. The major reasons for this decline were as follows:

Different roles of the officials in Project Tiger

The Indian Government governs the project Tiger as the Directorate of Project Tiger that comes under the ministry of Environs and Forests. The Director who monitors and supervises the running of tiger reserves and brings the financial aids to various state governments manages this project. State governments have the administrative control on Project Tiger. The field Director submits the report to the Chief Wildlife Warden. The Deputy Directors and general field staffs assist the field director.

The state governments receive full financial help for non-recurring and half-financial support for the recurring items that are approved.

The major objectives to launch the Project Tiger are as follows: 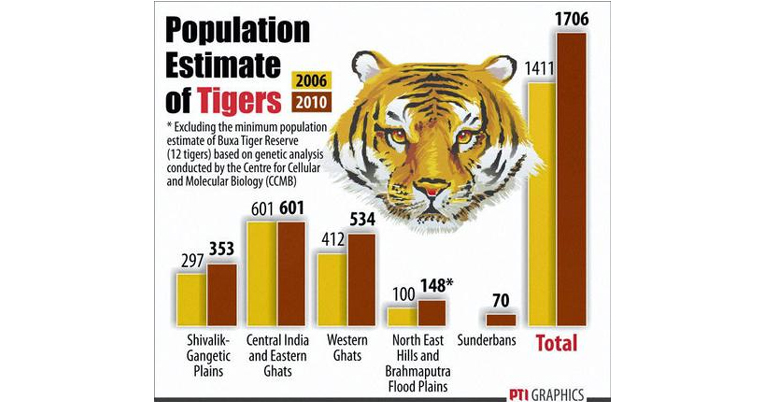 The Crocodile Conservation Project was introduced in the year 1976. The chief objective of the project was to protect the nation’s three rare crocodilian species, viz. the freshwater crocodile, Gharial and the saltwater crocodile.

The rehabilitation of the gharial was a subunit of the Crocodile Conservation Project. It was emphasized on Gharial predominantly. The Gharial was on the brink of extinction in the year 1974.

Project Elephant is aimed at saving the habitation of the giants. This project was started in 1991-92 to support the states that have a larger number of elephants in order to make certain the long-term existence of these mighty creatures in their natural abodes. To meet the aim of this project, the states are also provided financial, scientific and technical aid as well.

The foremost goals of Project Elephant are mentioned below:

Some other conservation schemes and plans

The Forest Department gives monetary compensation for the cattle killed in the buffer zone but there are procedural delays in disbursement. Interim Relief Scheme (IRS) provides on-the-spot monetary help to the affected villagers. The villagers inform TCF offices in Dhikuli and Rathuadhab about any cattle killed in the area. TCF team, consisting of an inspector, tracker and driver, then does an on-the-spot inspection within 24-36 hours. The team assesses parameters like whether the kill was done by a tiger or a leopard, the age of the animal killed, the GPS location, etc. After the team is convinced about the genuineness of the kill, it pays the applicable interim relief amount to the villager.

Corbett faces heavy rainfall during monsoon which increases the chances of mouth and foot disease in the cattle found in the surrounding areas of CTR. There is the risk of such disease being transferred to wild animals of Corbett. To prevent the wild animals from such transmissible disease, Corbett Foundation in collaboration with Ramnagar Veterinary Department, conducted a vaccination camp for the livestock in the local areas. About 6000 livestock were vaccinated under this camp.

There are many environmental programs that are held by Corbett Foundation in and around the park. These programs are remarkable in creating awareness amongst the local habitants. Some of such programs are

Consultation on the challenge of Tiger Conservation in Corbett Landscape: A Consultation on the Challenges of Tiger Conservation in Corbett Landscape was organized, in which more than 50 representatives from the forest department of the Corbett Tiger Reserve and the adjoining forest divisions participated; top NGOs like TRAFFIC India, WWF – India, and Wildlife Trust of India; eminent media person and Trustees and staff of The Corbett Foundation also took part. The major points that were conferred and focused all through the session were:

1. The fraction of Corbett Tiger Reserve, which comes in Uttar Pradesh is extremely sensitive and requires particular attention from the point of view of conservation.

2. A Tiger Task Force with efficient anti-poaching capability should be created instantaneously and introduced in the Corbett Landscape.

3. Make certain the complete security of significant wildlife corridors that hook up Corbett Tiger Reserve with other forest divisions.

6. Need to reinforce adjoining territorial divisions for the safety of tigers in these regions as tigers are densely found in these areas.

7. Implementation of eco-friendly models for all the hotels and resorts near Corbett Tiger Reserve, in order to reduce the harmful effects of tourism activity on animals.